Home > About Us > Lake Level & Tourism

Use the link below to view the current lake level.

Lake Opuha is a 700 hectare man-made lake, built with the purpose of acting as an irrigation reservoir, which offers good fishing.  The lake lies hidden away and sheltered within the Fairlie Basin, 12km from the township of Fairlie.  As well as fishing, the lake is used in summer for boating, kayaking and water skiing.

Stored winter and spring river flow is released in summer for stock watering and domestic and industrial use.  In addition to water storage, the lake provides electricity with a small scale hydro 7.5MW electric plant on the outlet of the dam at the head of the Opuha River gorge.  The Opuha River then flows south-easterly to join the Opihi River.

Lake Opuha is a great fishing lake.  Power boats are allowed on the lake and there are several boat ramps to get you launched on to this wide warm body of placid water.  Spaces for camping and picnics are large and well spread out.  The lake boasts three introduced species of fish – rainbow trout were in the Opuha river before the dam was built; brown trout and salmon have been released since. The salmon are landlocked by the Opuha dam and generally have a life expectancy of three years.

The lake is also a great source of recreation with wonderful fishing, boating and water skiing opportunities.
Freedom camping is permitted at Lake Opuha at the 3 designated camp areas, except between 23 December – 2nd Monday in January when no camping is permitted.  Length of stays are limited to 2 nights only.

How to get there?  Turn off SH79 east of the Opihi River and Fairlie and follow Clayton Road, a long straight tar-sealed road, to Lake Opuha.  See the Opihi/Opuha River access map here. 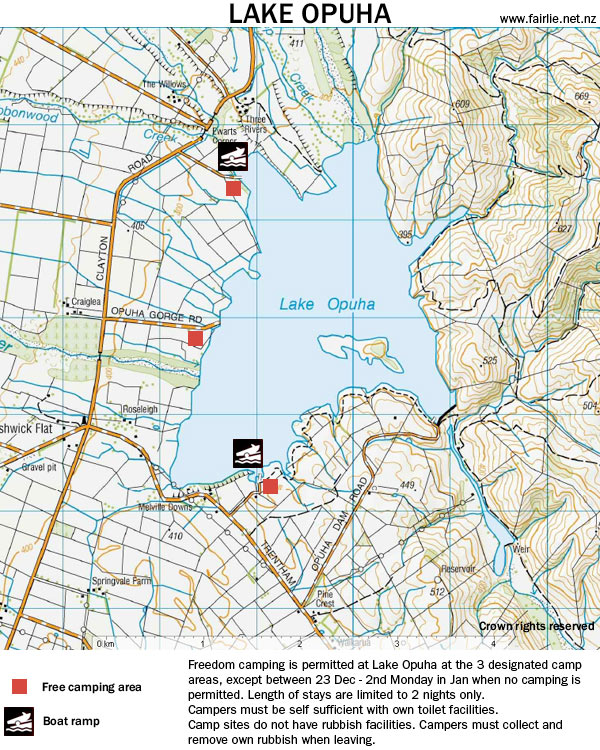