Home > About Us > Scheme Operation

The Opuha scheme operates by releasing water into the Opuha River which flows into the Opihi River.  Irrigation takes are from both the Opuha and Opihi rivers.

Irrigation water is supplied to a number of sub-schemes (Levels Plain, Kakahu, Totara Valley, Sutherlands) off these rivers which distributes the water through distribution races and channels. The water is pumped from these races and channels by the land owners.  Other irrigators pump from the river either through galleries or adjacent bores. There is less than 2% of the irrigated area remaining in borderdyke irrigation.
Water is also supplied to the Timaru District Council for commercial and domestic purposes. 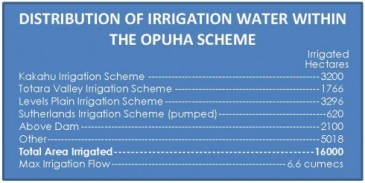 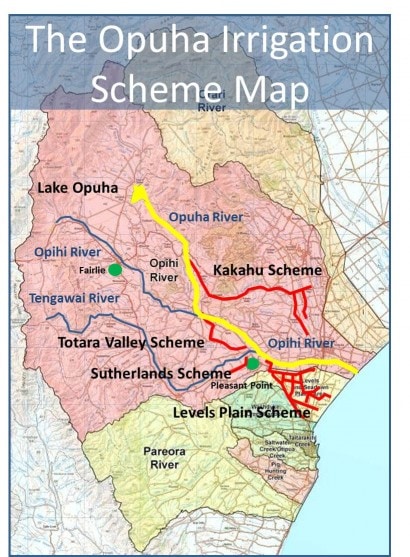 Opuha Water has its own management and administration structure and personnel.  The company contracts out the maintenance operation of the Power Station and river control gate to TrustPower.  TrustPower have their Operation Centre in Tauranga and maintenance support from their base at Lake Coleridge.

The Opuha Dam facility includes a 7MW hydro station at the base of the dam that generates electricity with all the water that is released from the  lake storage.  The power station provides a valuable contribution to the local electricity network and the revenue from the electricity sales accounts for approximately half of the company’s income.

The power station is operated and maintained under contract by Trustpower.  The station is monitored and operated from their Control Centre in Tauranga and the maintenance support is based at Lake Coleridge approximately 60km north west of Methven and 170km from Lake Opuha.

The electricity generated from the power station is sold under a Power Purchase Agreement currently with Pulse Energy.
The electricity connection is into Alpine Energy’s network and onto Transpower’s national grid via the substations at Fairlie and Albury.  The amount of electricity generated annually is entirely dependent on the hydrology of the catchment (lake storage and downstream water demand).  The output can vary considerably from year to year and for any particular month.  The graph below gives an indication of the historical variability.